SkyfloX and LuxSpace to evaluate AIS data collection with ORCA

AIS (Automatic Identification System) is a system that transmits a ship’s position, to avoid collisions. This data is also widely used to create a maritime awareness picture, using this data to, for example, predict when a vessel is due to arrive in port.

There however exist significant AIS data gaps, so called “white spots”, in the global AIS coverage, particularly in high shipping density areas, due to Satellite AIS receiver constraints (receiver saturation, message collision, interferences, etc.), and areas where no terrestrial AIS antenna can be installed. Concerned (unserved) areas are for example the North Sea, Baltic Sea, Bay of Biscay or Mediterranean Sea and others (see image below). The lack of position reports/AIS based vessel tracking capabilities in these areas cause gaps in ship tracking data information, create an incomplete maritime awareness picture and/or impacts the quality of derived information such as the Estimated Time of Arrival (ETA) for vessels.

By mounting AIS receivers on commercial aircraft as part of the ORCA (Optical and RF Constellations on Aircraft) concept, ORCA may produce data that complements existing satellite and terrestrial sources, significantly improving data availability in the AIS data gaps/white spots.

This feasibility study will be performed in cooperation with LuxSpace, under ESA co-funding as a first step in developing this service. 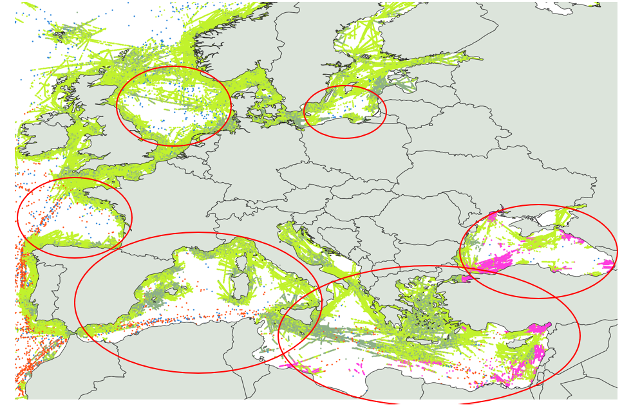